So it happened. I was balancing on the kids’ Lightning McQueen car bed by the window in their room, because it’s the only mirror with decent lighting. I was carefully applying some brow powder, and using the same brow kit to do eyeshadow, because I’m classy like that. The girls were playing with a neon-blue eyeshadow that I picked up for them in a moment of just-put-it-in-the-trolley-and-please-stop-asking-me-for-stuff while shopping in Chiang Mai, Thailand (we have lots of moments like that).

Eira was rifling through the toiletry bag, and pulled out a box of Durex.

“Mummy, what are these?” she asked.

Rewind to four weeks ago, when she’d asked the same thing after finding a condom in its individual foil wrapper in the toiletry bag. I’d paused, and then told her I’d explain later, as we were heading out the door to meet friends. This was partly true and partly a fob-off because I’d panicked and didn’t want to say something without thinking it through. Yesterday, I was prepared. 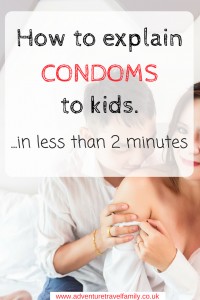 I put my eyebrow kit down.

“You remember I told you about sex, when you asked how babies are made? Where the man puts his penis in the woman’s vagina? Well, if a man and woman want to have sex but they don’t want a baby, they can put a condom on the man’s penis and it catches the sperm so it doesn’t go inside the woman and make her pregnant.”

“Yep.” I opened the box, pulled out a foil square and took the condom out. Eira touched it.

“Yep, it has something called spermicide on it to make sure live sperm don’t get inside the woman.”

I wasn’t actually prepared for this, and we didn’t have any bananas in the apartment. I looked around, grabbed a hairbrush and turned it upside down.

“Pretend this is the penis- it goes on like this, and the sperm gets caught here.”

“Not right now, maybe one day. Until then, we’ll use these.”

“Can we make animal balloons?”

“Erm- they’re a bit slippery for that, love.”

And that was it. The two older girls now both have a good working knowledge of one of the most common forms of contraception, and I have a greasy hairbrush handle.

The girls and I our first proper sex talk a couple of years ago (I’ll do another blog post about that fun episode) and we’ve been having conversations about it whenever it’s been appropriate. It’s a very chilled, comfortable subject in our house and I hope that it makes the kids feel open enough to ask us questions and not feel like it’s taboo in any way.

For more practical parenting tips, check out our parenting blogs page, with everything from figuring out your child’s ‘love language’ to making bedtimes easier.

Have you had similar conversations in your house? How did they go? Let us know in the comments, and please share this article if you think it would be helpful to someone you know!